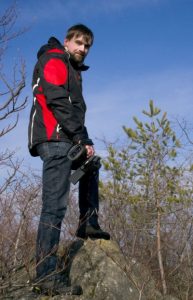 Welcome to our website and let me to tell you a brief history of our company film production division. My name is Jerry Zak and I am a co-founder of JF Production. Personally I am especially interested in film and photo production. My photos and documents are in standard 2D technology but I am specialized in stereoscopic technology today popularly called 3D technology.

Since 1998, I had been involved in digital photography of animate and inanimate nature. Ocassionally, I also had made video documents of various significant events in my neighborhood. I had passed my final exam in 2005 at Technical high school in Trebic and then I finished my studies in 2010 as an engineer at Brno University of technology. My interests in photography were deepen by my close connection to the technical disciplines especially electrotechnics. I gently started to specialize to extraordinary types of photography as a macrophotography, astrophotography and photography of natural phenomenons. Gradually, I began to undestand photography as a basic documentary instrument for capturing and madiation of unrepeatable moments in my neighborhood.

In 2008, I accidentally saw a few stereoscopic photographies today well known as 3D photograhies. They totally enthralled me by its potential of documentary complemented by the third dimension. Since that, I have got into the secrets of this technique captured by different techniques. As time went on, the 3D technologies has become available to general public due to mass popularization in show-business. The time for returning to the silver screen has come for me – in 3D of course.

I bought new electronic devices for direct video capturing in 3D in 2012 and I started with motion picture capturing at full blast. I added time – the last fourth dimension to my documentary production by that. From this time, I started with natural beauty saving for the future generations in 3D FullHD records. I started with short movies and also with the bigger projects. We should mark the film document “Slovak paradise” as one of the first bigger projects.

During my studies at Brno University of Technology in the end of 2013, I met Vojtech Svatos – the singer, musician and composer in one person. We had made a few small projects together and our close collaboration grew. We decided to create definitelly our united company – JF Production in 2014. Now, we are involved in the united audio-visual production not only documentary films. We expand into the music videos and complex audio-visual production and services.

I would like to thank everyone who helped me in my professional life, my new colleagues, the older ones and also to my family where I was lead to filmmaking from my childhood.

We use Google Analytics. You can disable it.